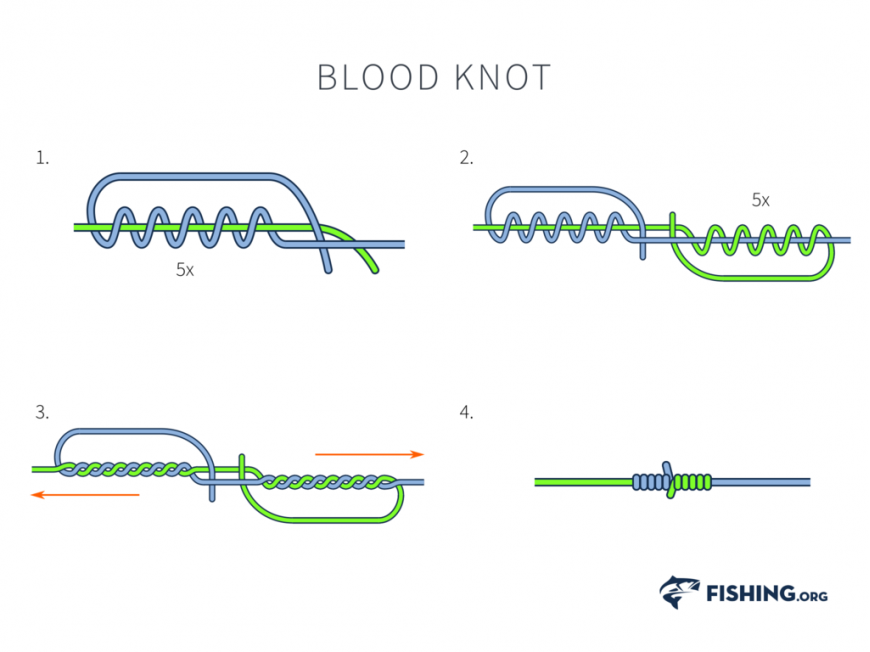 A Blood Knot has become known as a favorite knot to tie by fishermen. It is normally used to tie two lines in similar size together and is one of the more ideal knots to join sections of tippet or leader. the knot can be made stronger with at least five and as many as seven turns on each side of the middle. The Blood Knot is a fairly simple and easily learned way to join two lines similar in size together.

In order to make a Blood Knot you need at least two lines to join together. This type of knot has become known as a tried and true fishing knot. This knot also works best when the two lines are pretty much equal in diameter.
Step 1:
In order to tie a Blood Knot, the ends of lines to be joined need to overlap. Then twist one line around the other line in order to make five turns.
Step 2:
Next you need to bring tag end back between the lines.
Step 3:
The final step requires you to slowly pull the two lines in opposite directions.When the line is at the end of the twists put it through the loop and make an overhand knot, which is a half hitch on the closest side of the loop. It is important to keep constant pressure on the line end while doing this step. This will lock the knot into place.
Step 4:
When the knot is lubricated and pulled tight it will change in structure. By pulling on each line you will force the wrapped turns to move the twists so the inner strand actually becomes an outer wrap.

Another way to make this knot is to simply overlap the two ends and twist them together for ten to fourteen turns before going to the center and creating a hole. Next, you want to pass the two ends in the opposite direction through the hole.
Either way, the knot should end up fairly symmetrical around the middle. The twists will normally continue in the same direction on either side of the center and it can be tied so the wraps are mirror images of each other.

A favorite fishing knot, the Blood Knot, is also called the “Barrel Knot.” Whichever name you use does not matter as its purpose remains the same.

This is a "bend knot" for anglers to join sections of monofilament nylon line or fluorocarbon line of similar diameters, such as when adding a new line onto a half-filled reel spool.

Its primary purpose is to join the lines while maintaining most of the line’s strength.

There are other fishing knots that fishermen and women can use for this same purpose, but they often cause a substantial loss of strength to the line, making it weak and easy to break.

The Blood Knot has several uses and has become a tried and true fishing knot.

When to Use a Blood Knot?

Since the Blood Knot is the tying of two lines of similar size or diameter together, many believe it to be one of the more ideal knots to join sections of the tippet or leader.


It is a perfect tie for fly fishermen and women to use while fly-fishing. It is relatively simple and quickly learned. This angling knot serves to build a leader of gradually decreasing diameter with the castable fly line. Attach it at the large diameter end with the fly or at the small diameter end with the hook.


The strength of the knot depends on the number of turns. You need to make at least five to seven turns on each side of the center.


The Principal Drawback to the Blood Knot

Although the Blood Knot’s level of tying difficulty is not extreme, some will not use it because of its need for dexterity to tie the knot.


The Blood knot is "a double overhand knot tied in a cat-o'-nine-tails" and is a favorite knot to tie.

How to Tie a Blood or Barrel Knot

To make a Blood Knot, you need to join two lines together. You can use either mono or fluoro lines, but the two lines must equal in diameter.


Here is a step-by-step guide on how to tie a Blood Knot:

Once you tie a Blood Knot, it should end up reasonably symmetrical around the middle. It is one of the best knots to use, especially for the times you use a small, stiff, or slippery line. Thus, the perfect fly-fishing knot.