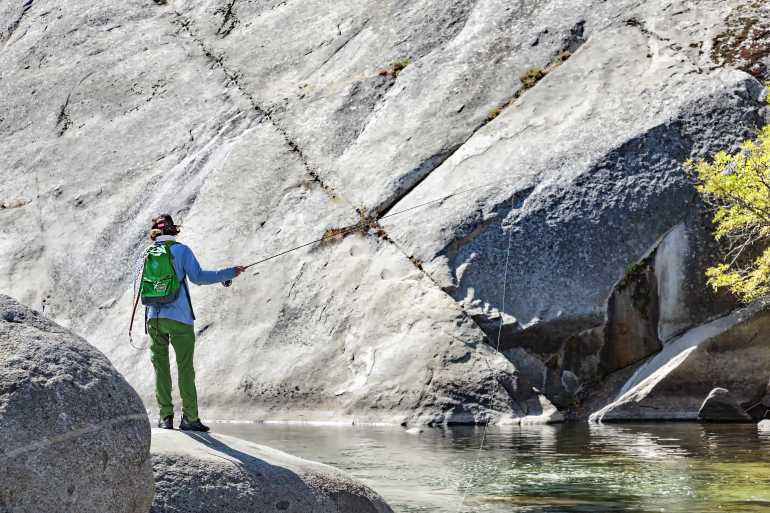 When most people think of California they probably think of cities like Los Angeles or places like Hollywood, both of which tend to draw hopeful actors and entertainers by the thousands. Other people might think of Silicon Valley where some of the world’s most innovative companies are located. But California is much more than an entertainment capital or the epicenter of the American technology industry. It is also home to a number of choice fly fishing destinations. Individuals that are interested in checking out the opportunities for fly fishing in California will likely be interested in checking out fishing holes that are located in Northern California which is the region where some of the best opportunities for landing an impressive catch in the entire state are located.

One popular fishing destination in Northern California is the San Joaquin River. The middle fork of the San Joaquin River has proven to be a wonderful location for those anglers who might be interested in catching trout. This particular spot is home to the standard breed of trout as well as a specimen that is a cross between a rainbow trout and a golden trout. Anglers that are interested in checking out the San Joaquin River’s middle fork while they are in Northern California should be prepared for competition. This location is said to be a very popular spot so any angler that wants to have a good chance at landing a good catch should ensure that they arrive early to stake a claim to a fishing spot.

Anyone that is new to the world of California fly fishing might be interested in checking out another fishing location that is known as Hat Creek. Hat Creek is home to an abundant number of trout. The foliage that dots the river’s shores along with the sizable fish population that swims in the river make it a great place someone who is new to fly fishing and interested in trying their hand at catching a fish for the first time. McCloud River is an excellent destination for anyone that is interested in seeking out brown trout or rainbow trout. It is considered to be one of the best fisheries in the state. Owens River, which is located near pristine mountains, is sure to be teeming with rainbow trout or brown trout no matter what time of year it is. The state’s temperate weather and continuous supply of fish make California fly fishing a fun experience for any angler regardless of their level of experience.