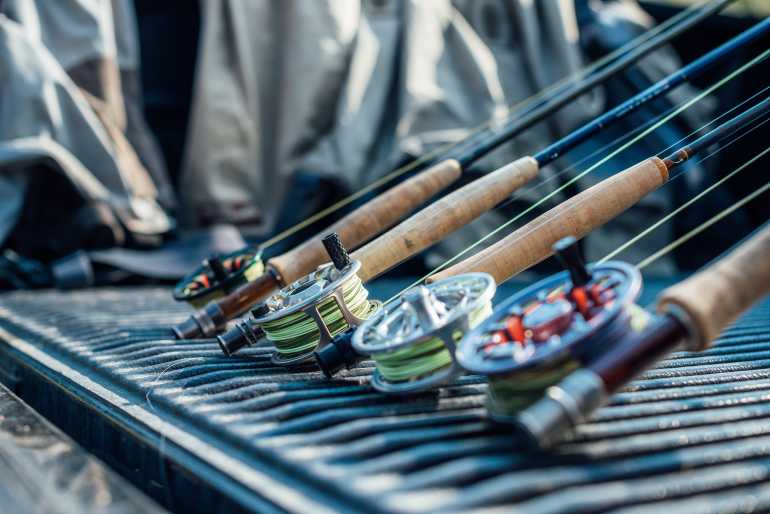 There is one basic principle that all fly casts revolve around which is the simple backward and forward casting motion and the control of the speed, direction, and loop size of the cast. When you are casting the fly line, the fly, and its leader to the target area, you should be using a combination of your shoulders, arms, wrists, legs, hands, and eyes. There are several different types of fly fishing casts that follow these basic principles.

Different Types of Fly Fishing Casts
Standard Casting – This case includes a smooth motion that lifts the fly line and rod in an up and back movement. When the rod is slightly past vertical, the backward motion is stopped. The forward cast is then started when the fly line begins to fall or straighten out. Your wrist will snap the rod from eleven and one o’clock position with increasing acceleration to shoot the fly and line forward towards the target area.
False Casting - False casting is useful when you want to gain distance by throwing out more line, to remove water from a hair bug or dry fly, or aim the fly towards a certain target. This cast has a backward and forward movement without casting the fly towards the target area.
Roll Casting – Roll casts take the fly line in a backcast motion that does not lift it from the water, but is pulled back along the water before being cast forward. It is best to use a roll cast when you don’t have the room to backcast or when you have strong winds that make it too difficult to backcast.
Curve Casting - A variation of the standard cast stroke, a curve cast will bend to the left or right. This is a helpful cast when you are casting around surface objects or you need to prevent the fly line and leader from being seen by the fish.
Serpent or Slack-Line Cast – This cast is created by a slack-line cast that triggers the fly line to drop on the water in an “S” curve. This type of cast lets the fly float and not drag in the water and is a good cast for when you are casting directly downstream or across current.
Reach Casting – This is a helpful cast when you are casting your fly across water that has several current speeds preventing the fly from going downstream faster than water that it has landed on. This type of cast lets the leader, line, and fly reach the target area at an extreme left-hand or right-hand angle.
Shooting-Line Casting – Similar to a false cast, a shooting-line cast is done with either a forward or backward cast with a lot more power than is needed to extend the line.
Hauling – You can achieve overall fly-casting efficiency or increased line speed with a hauling cast. This cast is done with a power stroke that simultaneously pulls the taut fly line down under the first stripper guide increasing the line’s outward speed haul.
Mending Line – By using several roll-casting and rod-lifting movements, a mending line cast will reposition the leader and fly line on moving water and is important when you are fishing in streams.