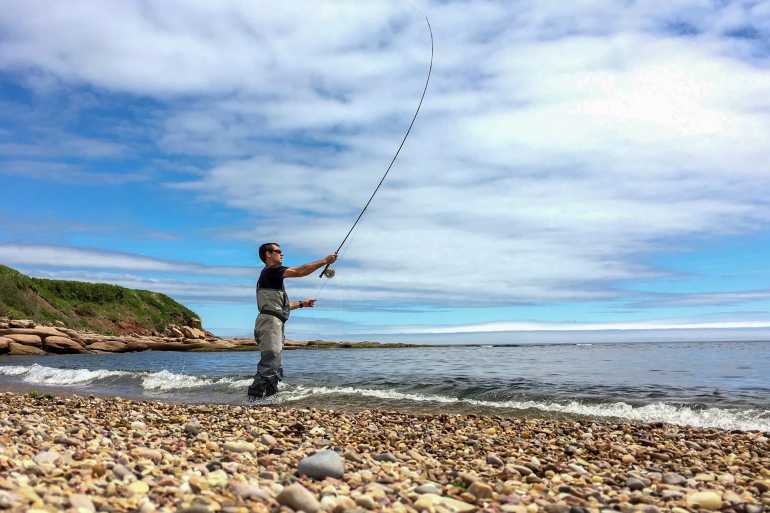 Freshwater fishing is often portrayed as a peaceful and idyllic activity. While the activity typically involves more than simply taking a good nap next to a still pond one might say that freshwater fly fishing is a little more tame than its increasingly popular counterpart salt water fly fishing. Freshwater fly fishing often involves searching for fish in a body of water such as a lake or a river that when compared to the ocean can arguably be described as relatively calm. The ocean however is always unpredictable and that element can make it appealing to fly fishing enthusiasts that have mastered the craft of freshwater fly fishing and who are looking for a new challenge.

Planning a fishing trip out on the ocean can come with its perks. For one thing fishing out on the ocean is a great excuse to visit the beach while taking part in an exciting hobby. Anglers can bring their whole family along and catch up on their tan after getting the chance to cool off in the ocean. Freshwater fly fishers are often beholden to patterns that impact the migration of fish meaning that the catches that they seek are not necessarily available when they have the time to seek them out. Often freshwater fly fishing trips must be strategically planned so that an angler gets the most out of it. After all it would be a shame to spend time planning a trip to a fishing destination along a river only to find out that you arrived at the wrong time of year for catching trout or bass.

When it comes to the ocean however there is always a catch available. Rather than having to keep track of the optimal fishing times for a lake or a river saltwater fly fishermen must be aware of patterns that are related to the tide as the tide is an important factor that determines where the fish will be. For those saltwater fly fisherman who are fishing on either the Atlantic or Pacific Coasts they should expect for the tide to rise twice a day. Fisherman who are on the Gulf of Mexico may be surprised to learn that the tide rises only once a day there.

One of the more thrilling aspects of salt water fly fishing is deep water fly fishing. While much of the fly fishing that is done on the ocean is done in shallow areas, deep water fly fishing takes place out where the depth of the water is greater than twelve feet. This kind of fishing offers a little more adventure for those anglers who are interested in taking risks and coming home with a wider variety of potential catches than they might otherwise have.

Deep water fly fishermen will be able to pursue large catches that fall into the category of a roamer. These sorts of fish include: dolphins, tuna, albacore, marlin and yellowtail among others. Deep water fly fishermen also seek out fish that are categorized as homebodies. Homebodies include species such as snapper, rockfish and great barracudas. Inshore fishermen who stay in more shallow areas will have the chance to catch fish that include: bonefish, weakfish, jack crevalle, sharks and rooster fish.